My family didn’t get an answering machine until the mid-nineties. 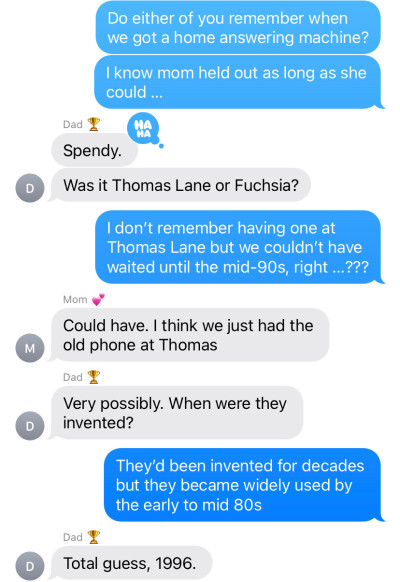 As a teenager then, I felt embarrassed, like we were the last people on the planet to be without one.

But my mom didn’t like them. She didn’t like the way she felt put on the spot when she called and got a friend’s answering machine — like she was talking to a robot, maybe even a little like her friends were signaling they were too important to pick up a call. She held out until pressure from friends and family, who were probably sick of having to call back after letting the phone ring and ring, eventually wore her down. (Nowadays, as evidenced by the above exchange, she has less of a problem using technology to communicate.)

This is nothing new

The same kind of shift plays out on a macro scale every time we’re introduced to a technology that enables more efficient communication: answering machines, email, mobile phones, instant messaging, ad infinitum. The early adopters make a lot of noise about how great The New Thing is, and the tech laggards wring their hands about how The New Thing is a stand-in for the handbasket in which we are all going to hell.

We’re witnessing it playing out in real time, right now, as scheduling links gain in popularity and social acceptability.

I can’t help but draw parallels between what’s going on with Calendly, and my family’s slow but gradual acceptance that an answering machine is actually more polite and convenient for everyone involved. That’s exactly what’s happening here, as increasing numbers of both senders and receivers recognize Calendly’s utility, and grow more comfortable with the medium as they encounter it more frequently.

Opinions about Calendly are growing more favorable over time

If you need proof that public opinion is steadily evolving in favor of using scheduling links, you wouldn’t need to look any further than the latest Twitter dust-up.

I won’t spend too much time on it here, but in case you missed it, the kerfuffle began when a tech VC tweeted a strongly worded missive against Calendly, calling it “The Most Raw / Naked Display of Social Capital Dynamics in Business.” Calendly users then leapt to the tool’s defense, and the conversation went so viral that, should you require a more in-depth recap, you can read all about it in Fast Company, or the Wall Street Journal, or CNBC. Or Protocol. Or Fortune. Or Product Hunt.

While it wasn’t the first time the internet debated the relative politeness of sharing a Calendly link, the tenor of this conversation felt different. Even just a couple years ago, when scheduling links were less of a known entity, public opinion was more or less evenly split.

As recently as April 2020, it was common to see informal polls like this one showing responses split down the middle with regard to scheduling etiquette.

Calendly usage has grown significantly, though, and with the rise in usage comes a rise in familiarity. People are getting used to seeing scheduling links everywhere, and it no longer seems like such a strange way to find mutual availability. (Not to mention that once you give it a shot and see how much more efficient it is for everyone, you wonder how you went without it for so long.)

These days, it’s more common to see polls that look like this: 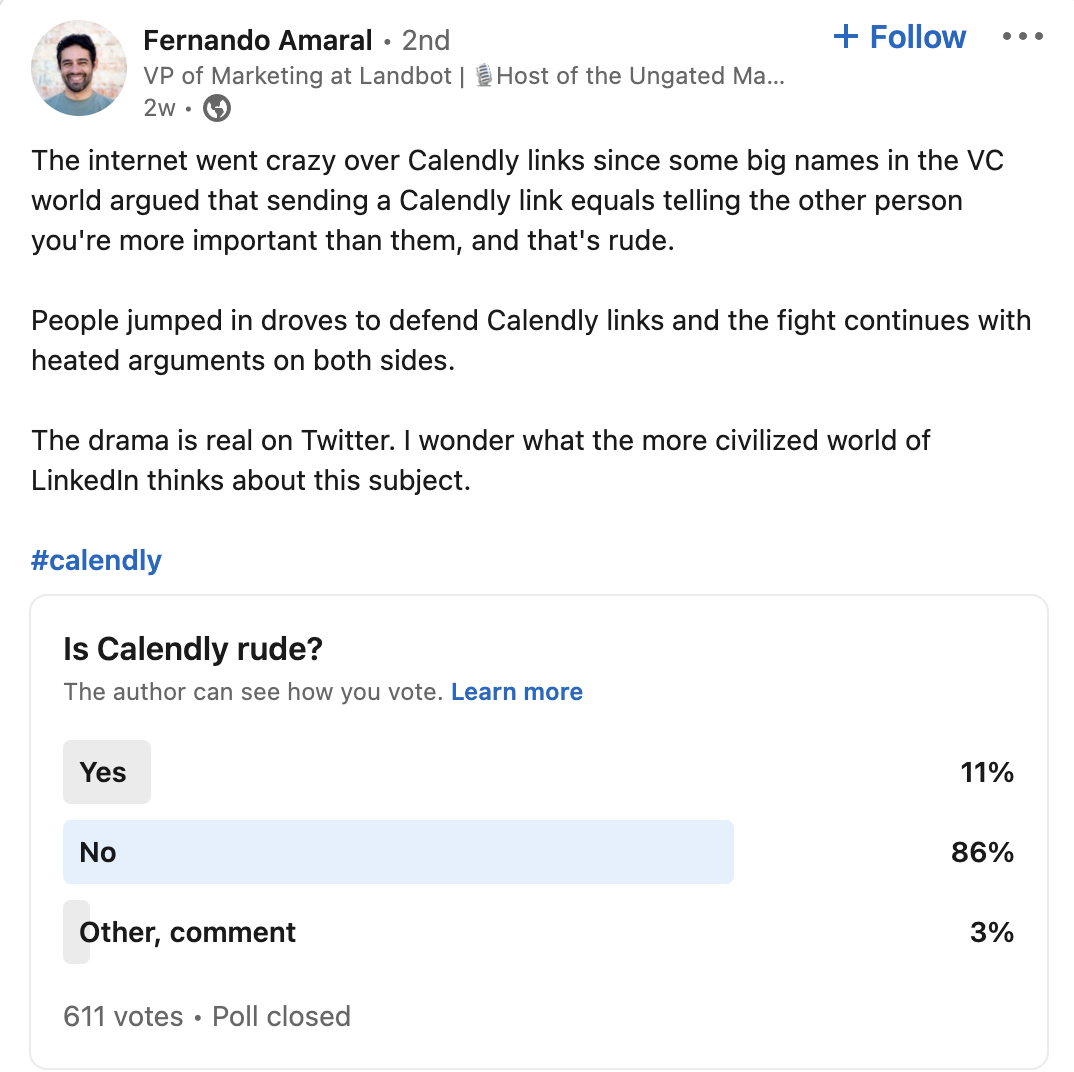 After the apex of Calendly’s trending, we asked our Twitter reps to run an analysis. It showed sentiment toward Calendly was 85% neutral to positive. 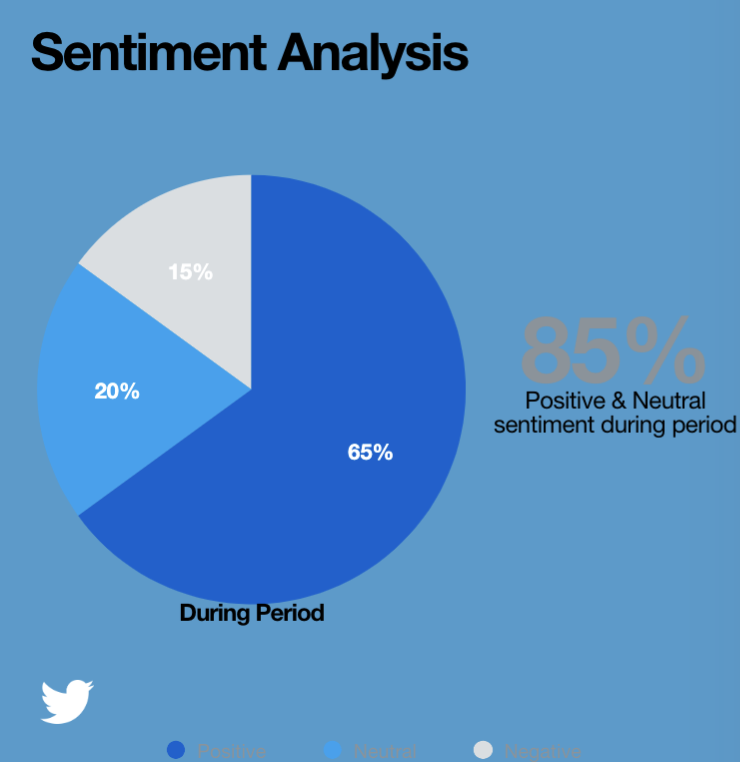 That’s a significant shift in a relatively short period of time.

Still, some people aren’t onboard with the idea of finding mutual availability via scheduling links. And as the makers of Calendly, we’d be remiss to ignore their concerns.

We’ve built (and will continue to build) human-centric features into the platform, and we create materials to educate people on polite and effective ways to share your scheduling link (like we did with this blog post, this e-book, and this webinar). One of our values as an organization is “Start With Human,” meaning we understand our decisions and actions impact real people, and we actively pursue and thoughtfully consider others’ input.

On its own, though, out in the wild, Calendly is just a piece of software. A tool. And the responsibility of how we use the tools in our toolkit is up to us.

when you send a Calendly link, the response depends on individual interpretation of what that means in the context of that interpersonal social or power dynamic. it may be good, or bad, but it's wholly subjective.
Calendly plays its own part in that. humans do the rest.

When a sales bro cold-messages you on LinkedIn and closes with “here’s my Calendly” before bothering to establish a rapport with you, that’s rude (not to mention ineffective). But is it the scheduling link itself that’s rude? Or the person wielding it irresponsibly?

Fortunately, the majority of Calendly users understand that politeness matters, and that depending on who you’re talking to and the level of deference your relationship requires, it’s not difficult to frame the sharing of your Calendly link in self-aware, courteous language:

It’s all in the presentation. The difference between “Here’s my calendly” and “Is there a time that works best for you? I’m free Tuesday and Wednesday after noon PST, but if that doesn’t work, you can also find a time via Calendly here!” is like tossing someone a brown paper bag, versus handing them a gift wrapped in pretty paper, tied with a bright ribbon.

This technology, like any technology, can either chip away at connection, or facilitate it. It’s in our hands.

While you might expect the opposite from someone who has spent the last decade-plus of her career at B2B SaaS companies, the apple didn’t fall too far from the tree when it comes to the speed with which I adopt new technologies. I wasn’t the first to jump on the email bandwagon, or to get a cell phone, or a smartphone, or to text my friends instead of calling them. I don’t want the V1 of anything. (I got it from my momma.)

So I’m certainly not going to be the one to tell you “Get on board; scheduling links are here to stay; like it or not; deal with it.” The truth is — just like you probably know some people who refuse to own a smartphone — a small percentage of people will forever dislike finding time via scheduling automation. They’re not gonna get onboard, and that’s OK.

For those of us who stand to benefit from the efficiency scheduling automation platforms provide, though, I hope it’s helpful to see how attitudes are continuing to grow more favorable over time. People are realizing that it’s not inherently rude to suggest scheduling via Calendly — that in fact, it can be more respectful of everyone’s time, since you’re eliminating the need to go back and forth trying to find mutual availability.

So go ahead and share your Calendly link, frame it in respectful language, and don’t worry so much about whether your recipient will think it’s some sort of weird power play. If you want to make extra super sure you’re sharing it politely, our e-book on Calendly etiquette has you covered. 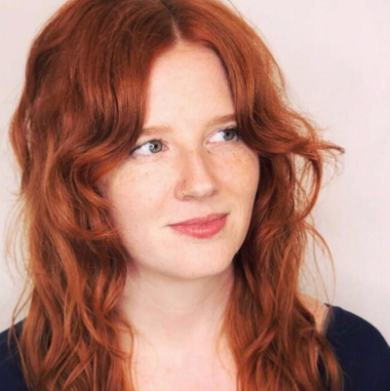 Emily Triplett Lentz is Senior Manager of Brand and Content at Calendly.

If you only need one scheduling Event Type, use these tips to make the most of our free Basic plan.

Here are eight amazing web conferencing tools that give you the most for your money.