Donald Kelly — a sales expert whose podcast has 2.5 million downloads and been featured in Forbes — found himself homeless as a teen.

“My mother worked multiple jobs, but she fell on hard times as a single parent, so we lost our apartment,” says Donald.

“I told myself I would never let this happen again to my family,” he says. “I realized if I can go through that and pull through, I can do anything. I’m Donald Freakin’ Kelly; I can do hard things. I can pick up the phone as a salesperson every single day.”

Rising up through sales roles

After graduating college, Donald landed his first business-to-business (B2B) sales role offering information-technology training classes. Donald says learning B2B sales was a “rude awakening,” but he got some training and saw a “hockey stick” improvement in his performance.

Now a sales trainer himself, Donald joined us for a webinar and shared some tips for using Calendly as a salesperson – or as anyone building a business by engaging with customers.

Following is an excerpt from our talk with Donald – you can watch the full webinar recording here.

1. Trying to schedule calls with prospects

In his consulting work, one of the challenges Donald sees salespeople wrestle with is scheduling a call with a prospect who is interested — but busy.

“It’s somebody that was really ripe and interested, but got irritated and frustrated so much that they say, ‘Call me back in a couple weeks and let’s try to set up another time.’ Sometimes we lose deals because of this lack of organization.”

Needing a tool to reduce this confusion, Donald chose Calendly. “What I like about Calendly is it’s a clean, simple-to-use platform that connects with my Google Calendar.” 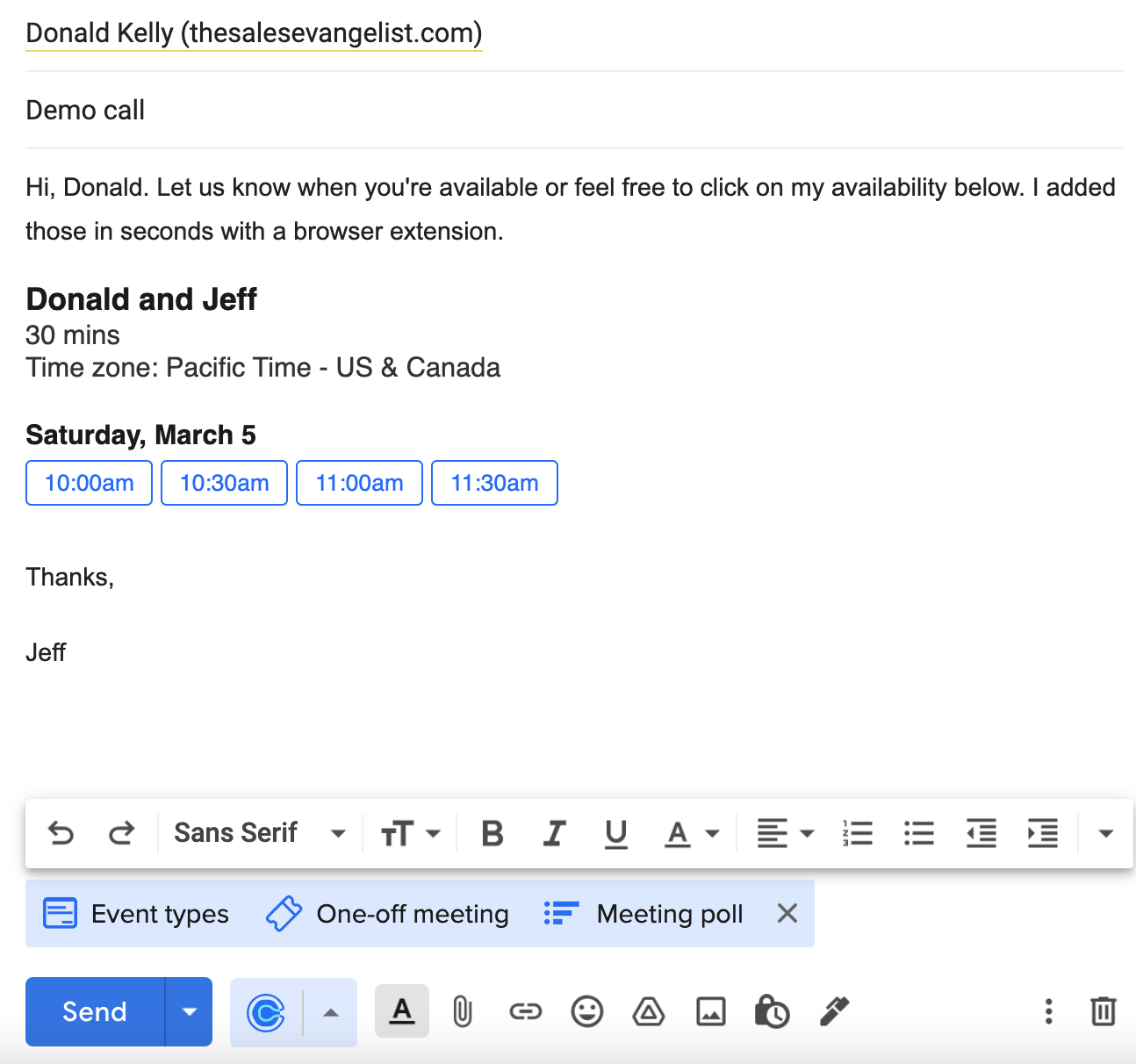 Donald believes it’s important to reduce stress and frustration when selling to busy buyers. “If you’re trying to sell to executives and busy people, they need things to be simpler. If the sales process is complicated they’re subconsciously going to think, ‘If it’s complicated to set an appointment, how difficult is their solution going to be?’” he says.

“With Calendly’s ability to insert times in an email, I can pick three-to-four times on my calendar and plop it into an email. They don’t have to leave the email and go somewhere else. It’s native to their email where they can select a time.”

They say good sales managers spread the opportunities to meet customers around their team. To that end, Donald recommends Calendly’s Round Robin feature for ensuring “whoever has free time on your scheduled appointment date is going to get the notification.” 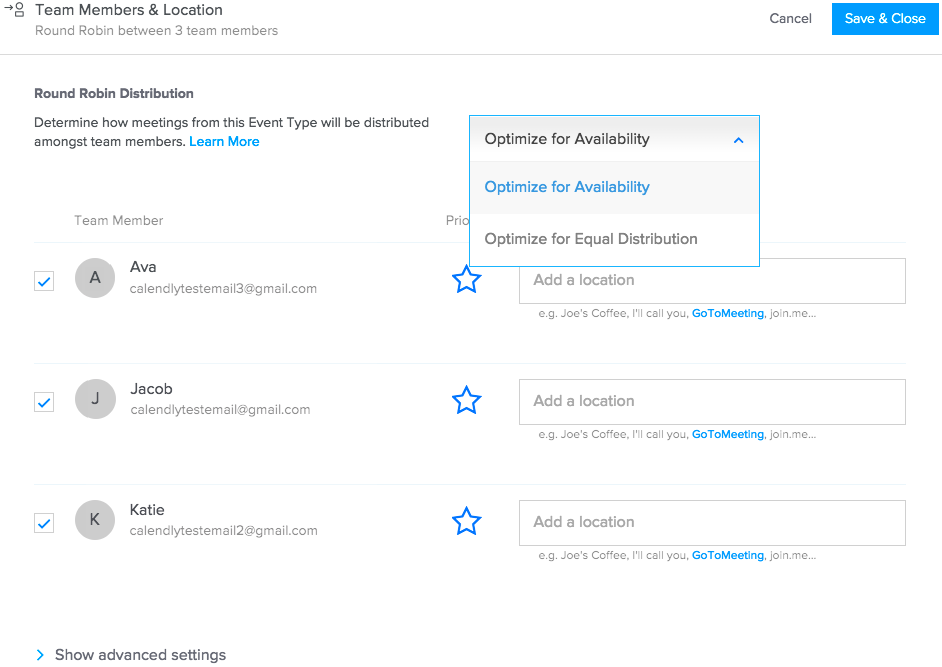 “In one software sales job, there were rumors one sales manager gave leads to certain people, and she said it was ‘Round Robin,’” says Donald. “But it wasn't automated.”

4. Remind prospects — and yourself — about meetings

"We’ve all had that situation where we had a doctor’s appointment or something, and Google Calendar reminds us 15 minutes before," Donald says. "We jump in the car, rushing to get to the appointment on time."

Donald likes Calendly’s Workflows feature because he can set meeting reminders an hour before, or even a day before – both for himself and the meeting attendee.

“Even post-conversations, you can send a follow-up note like ‘Hey, it was such an honor to meet with you today. Thank you so much for taking the time to chat with me. And by the way, if you want to get some more tips, here's some podcast episodes. I hope they can help you.’”

Donald says these post-meeting Calendly Workflows are “another way of following up that keeps you in front of the prospect and, in case you forgot to [manually follow up], you know those automated follow-up emails will be there.”

“Calendly reminders and follow-ups are a game changer and help business development representatives or entrepreneurs who are really busy and don't have the time to do all the follow-up emails,” Donald says.

Donald’s best piece of advice: If you’re ever running into a challenge in sales or anything in life, replace the picture with something positive.

Donald explains how there was a moment when he felt stuck in his career climb, and his partner suggested building a vision board. “I thought, ‘I’m not going to do that,’” he said. “But I started doing it six years ago, and it was amazing; all of these things I put on my vision board I pretty much accomplished.”

“Once you replace the picture from the doubtful and negative moment to something that’s positive and optimistic, it gives you an infusion of excitement to go take action.”

Ready to follow Donald Kelly's advice and make your sales funnel more efficient with Calendly? Sign up for free today. 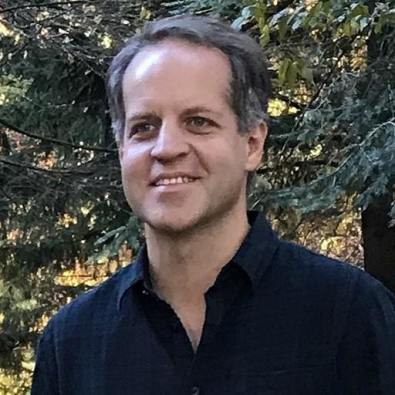 Jeff Hardison is a head of marketing at Calendly. He lives in Portland, Ore.

Using Calendly
5 mistakes you must avoid when scheduling online appointments

These crucial missteps might be driving up your customer acquisition cost.