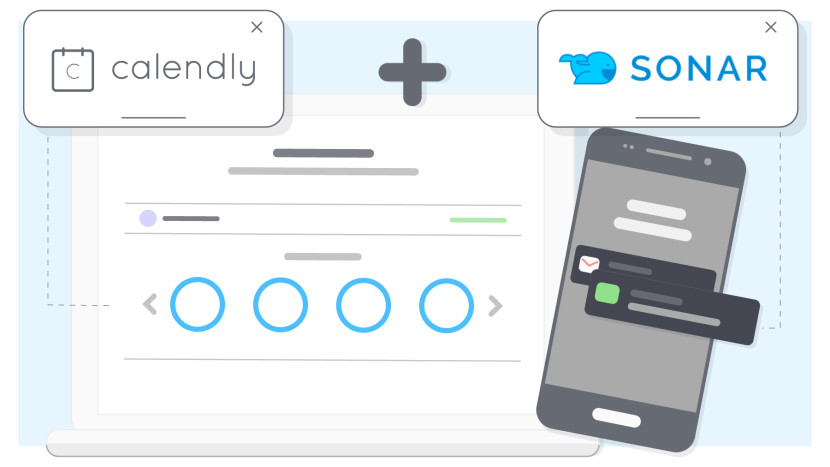 Calendly’s API enables SaaS businesses to deliver best-in-class online scheduling as a feature of their own apps, while they continue to focus on their core customer needs. That’s exactly what Sonar did by giving users access to appointment scheduling to improve communication with their prospects throughout the sales cycle.

Sonar identified a problem: customers were spending too much time going back and forth on their SMS platform just to schedule a meeting. Like all sales teams, their customers need an efficient process for scheduling appointments in order to meet or exceed their quota.

The team heard from customers that scheduling just one meeting could take more than 10 SMS exchanges manually sent to each lead. Multiply that by hundreds of leads and customers, and that’s a lot of wasted time that could be spent getting deals closer to the finish line.

Right away, Sonar saw a big opportunity to solve this customer need by integrating with an appointment scheduling app.

For sales teams and organizations, scheduling meetings is crucial to their business goals. They don’t have time to waste; they need to get prospects and customers scheduled while they’re interested to increase the chances of a purchase and improve customer satisfaction. But once the meeting is booked, there is still work to be done to make sure those meetings go off without a hitch—on time and with everyone prepared. That’s where Sonar has been able to help its customers through the Calendly integration.

One Sonar customer, a leader in online matchmaking, didn’t have a problem scheduling calls, but their leads would often forget that they scheduled. This increased no-show rates which could be detrimental to their team’s sales goals. Now, they no longer have to spend time manually following up to avoid no-shows.

Another Sonar client, Realtor, faced a similar challenge. They worked extremely hard to qualify leads, but risked losing those leads when a prospect failed to show up for a call with an agent. Similar to SaaS companies focusing on retention, Realtor began using Sonar and Calendly to focus on sales pipeline retention to keep the leads they had already gotten in the door.

With Sonar and Calendly integrated, sales teams have a completely automated process that yields higher attendance rates with less time wasted manually following up with each prospect before the big meeting.

HoneyBook, one of our wonderful partners, built an appointment scheduling integration through Calendly’s API to deliver an experience that matters to its customers, enabling them to acquire and retain more clients.

Get started with Calendly's API

Matthew Morrison is the business development manager at Geographic Farm

Every branch needs anywhere from 10 to 60 technicians; they have to source a lot of applicants